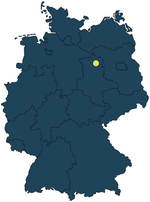 Johann Joachim Winckelmann (1717-1768) the founder of the classical archeology and of modern art history was born on 9th December 1717 in Stendal. On 8th 1768 he fell victim to an assassination in Triest. From 1763 president of all antiquities in and around Rome, Winckelmann was not only fundamental for archeology as a science but his idea of the classical world has deeply influenced the classical period of German literature and European art in general.

The half-timbered house is located at the point of Winckelmann’s birthplace. The museum opened to the public on 31st January 1955. Between 1979-1985 the house was completely reconstructed and extended. A new museum courtyard was recently opened to the public where festivals, lectures, author’s readings as well as small concerts are organized during the summer. In the 1970s the museum achieved international reputation and became a centre of ancient and new art in Stendal. Since 2000 it has been supporting and extending by the Winckelmann Society e. V.

The first part of a permanent exhibition shows the life of Winckelmann: his childhood and youth in Stendal, the apprenticeship in Berlin, his studies in Halle and Jena, the time he spent as a teacher in Seehausen, his time in Nöthitz and Dresden until his most important and creative period in Rome and his tragic death. A second part in the exhibition is dedicated to Winckelmann’s several works, his preoccupation with ancient sculpture, architecture, vases and cameos.

The Winckelmann collection was started by Dr. Heinrich Segelken at the end of the 19th century. Today it includes mainly autographs, first editions and early prints of Winckelmann’s works as well as pictures of Winckelmann and his contemporaries, views of Italy, engravings according to ancient originals, primarily from the 18th century, and a small collection of ancient art. The museum has also available a collection of contemporary graphics which refers to the reception of the Classical World. This collection was established predominantly between 1970-1990. With the help of foundations the collection has been extended considerably.

Every year on the upper floor the museum shows several large exhibitions concerning the history of archeology, art and culture history as well as the reception of the Classical World. The exhibitions often depict the results of international research projects for the interested public. The programme is complemented with small exhibitions of so far unknown ancient pieces of art.

Not only as an experience for children, the museum offers young and old likewise an adventurous journey into the past. They can explore a Roman villa which had been buried after the volcanic eruption of the Vesuvius, they can scale the huge Trojan horse or try to find their way out of a labyrinth. In the “archeology-camp” children can dig for hidden treasures and analyze the findings in a research laboratory. In the garden they can try out ancient games which children had already played 2500 years ago.

Moreover, for children of all ages there are various programmes of the educational museum service which help to make a visit memorable. Since 2003 the biggest Trojan horse of the world is located in the museum’s garden: 15,60 m high, 13 m long and 9,50 m wide it weighs 45 tons. It is accessible for visitors and from its top it offers a beautiful view overlooking Stendal. With the help of public and private sponsors it was possible to bring a piece of ancient mythology to Stendal to remind the visitors of the early transmission of the wooden horse in Homer’s texts from the 8th century B.C. It also refers to Winckelmann who was fascinated by the texts of Homer when he read them as a young person and when he used them later to explain antique art.

The exhibition- and meeting place of the Senior-Campus in the Winckelmann Museum is a venue where the exhibition space can be used to study jointly, to talk about and to experience art.  In the art and culture history and archeology exhibitions visitors can find enough seats, well readable labelling, soft drinks and coffee.  Surrounded by neo-classical furniture and numerous views of Rome (Wangenheim collection) visitors can go back in time to the age of Winckelmann. They can use books to deepen the impressions they have gained in the exhibitions or use a computer to go on a virtual tour through important museums around the world. In the artist’s workshop of the Berlin sculptor Christa Sammler visitors can experience the making of a sculpture – from the first idea till the completed work of art. In a gallery with plaster casts and bronze castings according to famous works of Greek art, visitors learn where Greeks and Romans erected their statues and what stories a statue can tell.