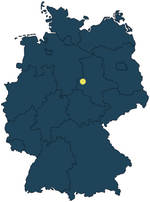 The poet Johann Wilhelm Ludwig Gleim (1719-1803) was a genius of friendship. Many important writers and poets of his time were his friends and he collected their painted portraits in his “Temple of friendship” (Tempel der Freundschaft) in his house. So he created the most extensive portrait gallery of the 18th century: Ewald Christian von Kleist, Lessing, Klopstock, Herder, Jean Paul, Anna Louisa Karsch, Elisa von der Recke and many more gaze at today’s visitors.

Besides paintings Gleim assembled books and letters to establish a voluminous library and a considerable collection of autographs. Gleim’s collections have remained in its original conception and can be regarded as the first German literary archives. At this place visitors and scientists are able to reconstruct the sociable, scholarly, amicable and literary communication in the north and middle German region in the second half of the 18th century. Thereby the focus lies on the context of picture, book and letter which is bundled and passed on in the Gleimhaus in an inimitable way.

In his testament Gleim decreed the public use of his collections. After his death the “Gleim Family Foundation” inherited the property of Gleim and in 1861 they made it accessible to the public in the residential home of the poet. That makes the Gleimhaus which is located near the Halberstadt Cathedral one of the oldest literary museums in Germany. In 1994 the Gleimhaus was enlarged with a new extension building. Today the museum is supported by the “Förderkreis Gleimhaus e.V.”. In addition this society has been awarding the “Gleim literature prize” every other year for outstanding literary and scientific performances since 1995.

Gleim was born on 2nd April 1719 as the son of a tax taker (Steuereinnehmer) in Ermsleben near Aschersleben. He studied the law in Halle and lived in Berlin and Potsdam before he came to Halberstadt to work as secretary for the Halberstadt chapter in 1747. Here he lived until his death on 18th February 1803.

As a young man he became famous for his poetry. Especially popular were his humorous  anacreontic poems, his Prussian patriotic songs in the time of the Seven-years’ war, his romances and fables. With his published letters he contributed to the development of a style of “natural writing”.

In his old age Gleim was an important supporter and collector. In the last third of the 18th century he was one in of the most important middle-class patrons for young poets in the north- and middle German region. Numerous authors like Gottfried August Bürger, Johann Heinrich Voß, Johann Gottfried Seume, Wilhelm Heinse and Jean Paul received in some cases very generous support from Gleim. He used his manifold circle of friends and acquaintances to foster the German literature. “Father Gleim” – as many called him – was an authority in the literary life of the late 18th century Germany.

Full of the ideal of the Enlightenment Gleim created a network of literary communication. With himself as the nucleus Halberstadt became a centre of literature in Germany. After a long time of disregard and depreciation literary scholars began to rethink works and merits of Gleim about 30 years ago. Nowadays Gleim is newly appreciated but there is still a lot to investigate about him.