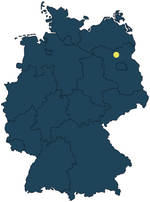 Kurt Tucholsky (1890-1935) was one of the most important journalists of the Weimar Republic. Even though he was an entertaining author he was a political being and as such he was deeply involved in the conflicts of his time. However, with his literary artistry he stands out far beyond his time and circumstances.

In only 20 years he wrote more than 3000 texts, many of them particularly sociocritical.

He used four pen names to publish his writings, until he started to question the whole object. When it became clear that the Nazi regime would take over the political power in Germany he retired from public life and left the country. In his Swedish exile he committed suicide in 1935.

For 20 years now the museum in Rheinsberg has been inviting visitors to get on a journey into the life and work of Kurt Tucholsky.

In August 1911 he and his girlfriend of that time visited the small town in the north of Brandenburg. One year later with reference to this incident he published his first book “Rheinsberg. Ein Bilderbuch für Verliebte” (Rheinsberg. A Picture Book for Lovers). It became his first remarkable success and today it is regarded as the literary foundation of the museum in the castle Rheinsberg.

The museum acts as a mediator of cultural education which includes the analysis of Tucholsky’s works and the research into interesting topics of his time and the life and work of important contemporaries. The main purpose of the literary museum is to create an interesting encounter with a great German writer and his work and make it a great experience for all visitors.