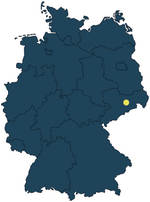 During his lifetime Gotthold Ephraim Lessing (1729–1781) made a name for himself as a writer, scholar and sharp-tongued critic. His dramas “Minna von Barnhelm”, “Emilia Galotti” and “Nathan the Wise” were ground-breaking works. His contribution to the development of German national literature soon brought him the reputation of being its most important representative. Perhaps his greatest achievement was the life-long engagement of his entire personality in tirelessly championing the ideals of the Enlightenment. To this day he is regarded as the most important and influential Enlightenment thinker in Germany.

Lessing was born in Kamenz on 22 January 1729. It is still possible to trace his footsteps in the town, even though he only spent his first twelve years here. The best place to get to know him is in the Lessing Museum which opened in 1931.

What might it have looked like under Lessing’s desk? And what has a hamster got to do with the famous poet? These and other questions are investigated in the new permanent exhibition about Lessing’s life and works. Visitors learn about the different periods of his life, meet his contemporaries and find information about his major works. There is a portrait gallery with paintings of Lessing and his ancestors. The room known as the ‘library of hovering books’ not only boasts an impressive ceiling painting but also elucidates Lessing’s impact down to the present day. The first editions and other books, the sculptures and further exhibits on display convey some of the fascination that Lessing continues to evoke even now.