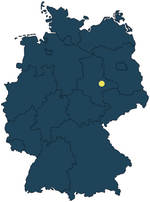 The Kurt Weill Centre is the only European documentary and information institute which keeps life and work of the composer of “The Threepenny Opera”.  The centre is located in one of the Master’s Houses, the “Feininger House”, which was built according to plans of Walter Gropius. Nowadays it is part of the UNESCO world heritage.

It includes a musician museum with archives, a library and a media centre which informs visitors about life and work of Weill. The headquarters of the Kurt Weill Society and the Kurt Weill GmbH (Ltd.) which annually organize the internationally acclaimed Kurt Weill Festival are located here, too.

The museum which is open to the public informs visitors in a permanent exhibition about the Dessau born composer, lets them experience audio examples and shows a biographical film. In connection with the Kurt Weill Festival special exhibitions are organized regularly referring to the special theme of the particular festival. The combination of the Bauhaus architecture and the music of Weill enables visitors to go back in time to the fascinating world of the Golden Twenties of the last century. The so called Blue Book of the German government lists the Kurt Weill Centre as one of the Cultural Memorial Places of national importance. It says: “The Kurt Weill Centre is an exceptional, charismatic institution which deserves to be promoted. It has therefore gained international respect.”

Kurt Weill was born 2nd March 1900 in Dessau as son of a Jewish cantor. In 1918 he started to study music in Berlin. In 1920 he started work as music director at the local theatre in Lüdenscheid. His studies with Ferruccio Busoni became crucial for Weill’s later artistic work, especially his opera aesthetics. In 1927 he began to work with Bertolt Brecht and in 1928 they created “The Threepenny Opera”.

After the Nazi regime took over the political power in Germany in 1933, Weill fled to Paris. There he wrote the music for the sung ballet (ballet chanté) “The seven deadly sins” (texts by B. Brecht) on behalf of the Theatre des Champs-Elysses, and completed his Second Symphony. Meanwhile in Germany his works were burnt in May 1933.

In 1935 Weill emigrated to the USA. One of his this early exile works was the Biblical drama “The Eternal road”. In the 1940s various of his musicals were very successful at the Broadway and in 1943 he became an American citizen. In his latter creative period he wrote besides other important compositions the American opera “Street Scene” and the musical tragedy “Lost in the stars” which deals with the Apartheid in South Africa during that time. Here Weill used special stylistic devices which pointed out his understanding of African music.