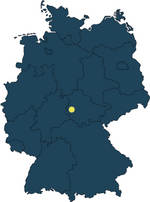 In Eisenach, the birthplace of Johann Sebastian Bach’s the first Bach museum was opened by the “New Bach Society Leipzig” in 1907. Today with a great selection of more than 250 originals on an area of.600 m², the Bachhaus presents an exhibition which shows life and work of Johann Sebastian Bach. It is Germany’s most popular musician museum besides the Beethovenhaus in Bonn. Unique are the little Bach-concerts which are hourly performed on historical instruments. The new building from 2007 is completely dedicated to Bach’s music -  it offers individual listening in glass-made seats, sensible listening at audio areas where examples of notes are given as well as comparative listening at mixing desks which allows different interpretations of Bach’s music. Visitors are literally able to walk through an exhibited musical autograph by Bach step by step. By walking through pieces of music the visitor becomes the centre of a cinematic production of four Bach performances on a 180° screen. The audiovisual approach which the Bachhaus created provides visitors with an outstanding experience of Bach and his music.

Bach was born on 21 March 1685 in Eisenach, where his father Johann Ambrosius Bach was the conductor of the so called Ratsmusik. There he spent the first ten years of his life and went to the same school as Martin Luther. He also took his first musical lessons in Eisenach where he sang in the choir of St. George’s Church in the “Kurrende”. All his life he called himself proudly an “Isenacus”. Later he lived in Ohrdruf, Lüneburg, Arnstadt, Mühlhausen, Weimar, Köthen and Leipzig, where he died 28 July 1750 as after an eye surgery.