Monday-Thursday: 9a.m.–4p.m.
Friday: 9a.m.–3p.m.
The visit of the Theodor-Fontane-Archivs
is currently only possible by appointment. 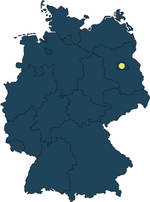 The Theodor-Fontane-Archives which were founded as literary archives in 1935 function as a scientific institution for the German federal state Brandenburg today. Since its beginnings the archives collect and preserve autographs, documents and other materials of Theodor Fontane’s life and work, his generation and his contemporaries.

Based in Potsdam since 1939, the archives moved into the local Villa Quandt in 2007. Surrounded by the park of the Pfingstberg, scientists can browse through the rich collection of autographs. In recent years the archives have been able to acquire significant new material to enlarge the collection considerably. In addition, the reference library may well be consulted, too. The archives also organize lectures, readings and guided tours for the public.

The Theodor-Fontane-Archives do basic research, take special care of editions and are host of scientific conferences. Since 1965 the archives publish the so called “Fontane Blätter” (Fontane’s pages) which have been offering the greatest insight for Fontane researchers. Since 1994 this has been done in collaboration with the Theodor Fontane Society.

Theodor Fontane (1819-1898) is considered to be the most famous author of German poetic realism. A learnt pharmacist he first wrote ballads and travelogues. He was not only a war correspondent, but also a journalist and theatre critic. However, his biggest success were and still are his late novels. He also proved in his letters that he was a high quality stylist. They have been published after his death ever since.