The museums are closed from mid-December to mid-January. 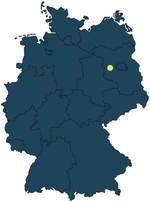 The lordship of the manor von Rochow

Around the year 1780 the village of Reckahn in the vicinity of the city of Brandenburg used to be a significant venue for enlightened contemporaries. The visitors came from several German territorial entities and from all over the Central and Eastern parts of Europe. Their destinations were the village school of Reckahn and the school`s founders, Christiane Louise (1734-1808) and Friedrich Eberhard von Rochow (1734-1805). Their educational an agrarian reforms prompted the modernization of schooling and farming in the 19th century. The lordship of the manor von Rochow managed to introduce a comprehensive alphabetization in their dominion thirty years before the so-called Prussian Reforms.

All the original settings, which still exist till this day, include the castle (1729), the manor park (about 1730), the old manor house (1605), the patronage church (1741) and the school building (1773). The Reckahn museums exhibit the impressive work and accomplishments of the lordship of the manor von Rochow including the exemplary model village school.

Since 2001 the Rochow-Museum Reckahn with its permanent exhibition “Vernunft fürs Volk” is located in the manor of Reckahn, former domicile of the Rochow family. In addition to the presentation of original exhibits, several audio-visual installations offer multifaceted insights into the work of social reformer Christiane Louise von Rochow and her husband, the pedagogue, agrarian reformer, writer and campaigner for the Enlightenment, Friedrich Eberhard von Rochow. The permanent exhibition was partly renewed in 2011 and its main focus lies on biographical information, peoples education, tolerance, applied public enlightenment, economy and sociability.

Registered visitors can try their hand at making paper or work with clay at the pedagogical workshop called „Rochow-Grotte“, situated in the basement of the museum. Upstairs one can find special exhibitions and frequently attend concerts or symposia.

The adjacent village schoolhouse, built in 1773, currently serves as the school museum. Access to all Reckahn-museums is possible with an all-encompassing Museum Pass.