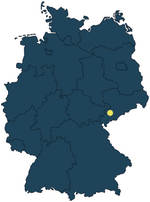 Robert Schumann (b. Zwickau 8 June 1810, d. Bonn 29 July 1856) is the most important composer of the romantic era in Germany. Only at the age of 20 does the son of a book publisher decide to become a musician. The paralysis of one finger ends his pianistic career, instead he becomes world famous as composer and writer on music. In 1840 he marries the pianist Clara Wieck – after five years of wooing and a law suit to get her the father’s permission. The couple lives in Leipzig, Dresden and finally Düsseldorf. After an attempted suicide in February 1854 Robert Schumann spends the last two and a half years of his life in a private psychiatric asylum in Endenich near Bonn.

The Robert Schumann House was opened on the site of the birthplace in Zwickau as museum, concert hall and research centre in 1956. It houses the world’s largest Schumann collection with more than 4000 original manuscripts by Robert and Clara Schumann, and it is known as one of the best German museums on musicians. In the eight rooms of the permanent exhibition valuable portraits, instruments, manuscripts, prints, concert programmes, memorabilia etc. are shown. The room in which Robert Schumann was born is entirely furnished with historical furniture and precious items formerly belonging to the Schumann family. These include the grand piano on which Clara Schumann gave her debut at the age of nine in the Leipzig Gewandhaus. Since 2011 the upstairs foyer, with a multimedia installation by performance artist Janet Grau, offers additional exhibition space and a bridge between present and past.