The Panorama museum – “The Sistine Chapel of the north” 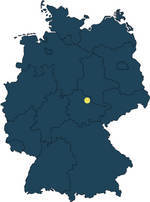 Bad Frankenhausen is a small town south of the Kyffhäuser mountains in the north of Thuringia and a place full of history. In 1525 the decisive battle of the German Peasants’ War was fought here. Today a cylindrical building enthrones above the town which hosts the painting “Frühbürgerliche Revolution in Deutschland” (Early Civil Revolution in Germany). The sheer size of the painting which has a hight of 14m and a circumfere of 123m makes it an outstanding piece in modern art history with its intellectual complexity and riches of characters and an incomparable experience for every viewer. The painter of this masterpiece is Werner Tübke (1929-2004).

In 1976 Tübke was commissioned to paint a panorama of the German Peasants’ War which took place during the 16th century. Shortly before the socialistic dictatorship ended, the Panorama museum Bad Frankenhausen opened its doors to the public. The result of Tübke’s assignment was a monumental painting which had gone far beyond his patron’s intentions. Tübke created a revolutionary painting showing not only the great upheaval from the Middle age to a modern age but also a universal, timeless world theatre where mankind’s fundamental and reaccuring issues symbolize the infinite repetition of life. This “Magic history mountain” represents the peak of Tübkes work and is generally a highlight of occindental art. When looking at it as a “painted cathedrale” it can even be recognized as the “Sistine Chapel of the north”.  Its power and significance of its pictures ranks it among the great masterpieces from the past. The Panorama museum is a place to be discovered and to be astounded, where visitors can behold and reflect, linger and dream. It’s a sensuous pleasure – not only for one’s eyes but also for one’s mind.