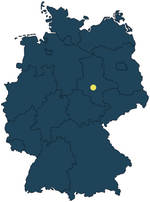 The Novalis museum Castle Oberwiederstedt which also includes the Early Romanticism Research Institut is located at the authentic place where Georg Philipp Friedrich von Hardenberg (Novalis) was born in 1772. Although he died very early in 1801, he is still one of the most important poets of the early German Romanticism, especially known for poems like “Hymnen an die Nacht” (Hymns to the Night) or the emblematic “Blue Flower” from his novel “Heinrich von Ofterdingen” (Henry of Ofterdingen). Among Hardenberg’s friends were Tieck, Schelling and the brothers Schlegel. When working as a lawyer he also trained  to become a mining engineer and a saltern specialist. His flexible personality combined aspects of philosophy, natural science, technology and poetry in a way which was unique for his time at the turn of 18./19. Century.

The castle Oberwiederstedt is a vivid literary museum which preserves and cultivates the intellectual heritage of Novalis. The permanent exhibition shows the poet and his family. Changing topical exhibitions introduce Novalis’ world of ideas. Lectures, literary and musical events for young and old as well as a festival of fairy tales are parts of the programme. There are also workshops and conferences of the research institution. Archives and the library are open to interested readers, students and scientists. The seat of the International Novalis Society and the Novalis Foundation “Wege wagen mit Novalis” (Venture ways with Novalis) are also situated in the castle. Visitors from all over the world can go for a walk along a lime tree alley, in the <st1:place w:st="on"><st1:PlaceName w:st="on">Blue</st1:PlaceName> <st1:PlaceType w:st="on">Garden</st1:PlaceType></st1:place> and pass by beets full of fairy-tale roses.