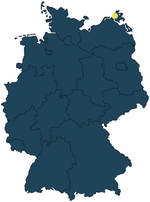 The house is the originally preserved summer residence of the writer and Nobel Prize winner Gerhart Hauptmann. It’s the only one of its kind and bears outstanding evidence of the artistic side of the island Hiddensee. It belongs to the most important literary museums of the German federal state Mecklenburg-Western Pomerania and is listed as cultural heritage in the so called Blue Book of the German government. Body responsible for the house is the Gerhart Hauptmann foundation, one of the first cultural foundations which was confirmed by the federal state Mecklenburg-Western Pomerania at the beginning of the 1990s.

The working and living rooms of the writer are furnished with many artistic pieces which bring the world of Hauptmann back to live and tell visitors about the artistic summer resort on Hiddensee at the beginning of the 20th century. Readings and chamber concerts continue the house’s tradition. The recently opened literary pavillon within the Gerhart Hauptmann House has been presenting literature of the 1920s and 1930s as well as a great selection of biographies of artists.

Gerhart Hauptmann is regarded as the most important author of the German Naturalism. He was born in the Silesian Riesengebirge(Giant Mountains) in 1862.  After his apprenticeship and years of travel he became famous for his drama “Vor Sonnenaufgang” (Before Dawn) in 1889. Among his best-known works are also “Der Biberpelz” (The Beaver Coat) and “Die Weber” (The Weavers). In 1912 he was awarded the Nobel Prize for Literature. Gerhart Hauptmann died in Agnetendorf in 1946 and he was buried on Hiddensee as he had requested.