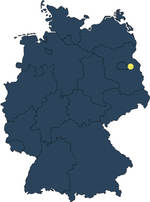 As the second German writer after Paul Heyse Gerhart Hauptmann was awarded the Nobel Prize in Literature on his 50th birthday which depicted the top of his artistic career. He celebrated his anniversary with 150 invited guests at the Adlon hotel in Berlin. The second six-volume edition of his works was published in Germany and even a fourteen-volume edition in Russia. Hauptmann has been appreciated as a famous author all over the world. However, back at the time the German Kaiser wouldn’t forgive him writing the drama “Die Weber” (The Weavers).

It started with a theatre scandal of “Vor Sonnenaufgang” (Before dawn) in 1889 which put Hauptmann in the vanguard of the German Naturalistic Movement. Until then Hauptmann had been undetermined between sculpting and literature and at this stage the Naturalists had made their way without him. What they were looking for was a great writer, someone who could stage the Naturalism. They had already opened their theatre the “Freie Bühne” (Free stage) and finally they found Gerhart Hauptmann.

In 1912 he had just put his things straight. Since 1904 he was divorced from his first wife Marie, née Thienemann. For the second wife he built the “House Wiesenstein” in the Riesengebirge (Giant Mountains). The German press reported enthusiastically about the pomp and the splendor of this house. Hauptmann’s short affair with Ida Orloff in 1906 had then become nothing but a literary subject, though for him the passion for her remained strong until his death in 1946.

His fame grew while the social commitment of the writer was shrinking. When the Swedish press asked the new Nobel Prize winner about his political interests he admitted that he used to be a social democrat but right now he wouldn’t belong to a political party anymore. An ironic comment from the Swedish press pointed out that Hauptmann was obviously not exactly the same person anymore who had written “The Weavers”. That describes perfectly the undecidedness of Hauptmann’s character. The “nu ja,ja – nu nee, nee” (well, yes – well, no) from “The Weavers” corresponded with the state of Hauptmann’s mind. He made it an issue of his works and lived up to it at the same time. That also explains why his political statements were so ambiguous, that they were used by very different political powers. Only the Weimar Republic met his mixture of socially based compassion, literary brilliance and his tendency to representation combined with philanthropy. During this time he became the person that Thomas Mann called “Vater des Volkes” (Father of the people). When in 1921 the press spread the news that Hauptmann proposed for the post of the German president, he publicly rejected the statement. But in his diary he speculated on becoming president “because no one else incarnates the German fate my way.” He was speaking about his undecidedness and therefore, it is not surprising that he was fascinated by the character of Hamlet.

He gained lasting fame. His dramas such as “Der Biberpelz” (The Beaver Coat), “Die Ratten” (The Rats), “Fuhrmann Henschel” (Drayman Henschel), “Before Dawn” and recently even “Und Pippa Tanzt” (And Pippa Dances) are still performed today in theatres. His prose has been appreciated ever since and his book “Bahnwärter Thiel” (Signalman Thiel) is also read in schools today. The short novel “Der Ketzer von Soana” (The heretic of Soana) and the late novella “Mignon” became insider tips surrounded by mystery.

Hauptmann’s work was of great importance especially for the Soviet Occupation Zone and for the GDR. Two Hauptmann museums were located there, one of them in Erkner near Berlin and the other one on the island Hiddensee.The Russians have always had a special relationship to Hauptmann – in 1902 the first edition of his work was published in Russia even before it was published in Germany. Therefore it is not surprising that representatives of the Soviet Military Administration in Germany demonstrated respect when bowing at Hauptmann‘s grave on Hiddensee in 1946. The writer wanted to be buried on the island which had become his second home. His house “Seedorn” has been preserved in its original condition by the foundation of Hauptmann’s daughter-in-law Annalise Hauptmann. He had described his wish in his terza rime  epic poetry “Der große Traum” (The Great Dream) and he gave it to his wife Margarete as his last will: “If I wasn’t afraid of hurting the feelings of my beloved Silesians, I would like to sleep my eternal sleep on this modest cemetery of Hiddensee.” His wish came true when he had to leave Silesia after the Second World War. History can be dreadful and gracious at the same time and in this case it decided for the undecided writer again.

“I lived in Erkner for four years. Those years were crucial years of my life. Connected strongly to the Brandenburg Marches, here I wrote “Fasching” (Carnival), “Signalman Thiel” and my first drama “Before Dawn”. The four years have become the four corner pillars of my work.”

(Letter by Gerhart Hauptmann to the local authority of Erkner, December 1936)

Since 1987 the Gerhart Hauptmann Museum is located in the Villa Lassen. It is the only one of its kind in Germany. The permanent exhibition shows an overall picture of life and work of the writer. The interior design was reconstructed partly with the help of the Hauptmann’s estate. The collection includes a large part of the Hauptmann’s library as well as the holdings of the Hauptmann archives Radebeul with documents of his life, letters and autographs. The Gerhart Hauptmann Museum is a central venue for Erkner where readings, concerts, film screenings and special exhibitions are organized.