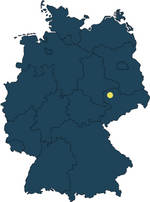 At 12 Goldschmidtstraße, Leipzig, the musically interested visitor finds the last preserved residence of the outstanding composer, musician and culture professional Felix Mendelssohn Bartholdy. Here he died, aged 38, on 4 November 1847. His appartment was reconstructed and furnished in biedermeier style and is now a museum in honour of its former resident. Information on the artist’s life and work, complemented with original letters and scores, watercolours and original furniture from the family’s possession illustrate the composer’s family life and work as well as 18th century life in general.

„Ich wollte meine sämtlichen Werke dafür hingeben, wenn mir ein Werk wie die Hebriden-Ouvertüre gelungen wäre (I would give away all my works if only once I had succeeded in writing an oevre such as the Hebrides Ouverture.“  Johannes Brahms about Felix Mendelssohn Bartholdy . From: A. Hartung/K.Siegel (Eds.): Aus dem Leben und Schaffen großer Musiker, No. 2, Berlin 1971, p. 35.

Felix Mendelssohn Bartholdy, born in Hamburg and raised in Berlin, had been educated in the spirit of his grandfather Moses Mendelssohn’s philosophy of tolerance and responsibility.

Still a young man, the artist already went abroad quite often – together with his father and the whole family. France and Switzerland were the first countries he explored.  Many occurences during these journeys aroused his enthusiasm of gaining musical inspiration from the traditions and nature of foreign countries. Senses alert, he used to listen to people singing and making music.

His two journeys for educational purposes, that is the trip to England and Scotland in 1829/30 and the trip through Italy 1830–32, which he set out on all by himself, were exceptionally formative experiences in his life. Due to commendatory letters to the best addresses, the opportunity to apply in the salons and become acquainted with the society and the local artists, opened to him. These experiences made him ripen to become a sophisticated young man.

Mendelssohn visited England ten times in his life, for he highly estimated the opportunities of the bourgeois musical culture there. He willingly accepted elements from, for instance, folk music to  influence his own oeuvre. These influences became  assimilated mainly in his piano works and songs, but also in his symphonies.

Honouring Felix Mendelssohn Bartholdy today does not only refer to his achievements as a composer and brilliant conductor of the Gewandhaus Orchestra. It means first and foremost honouring his awareness that foreign knowledge and thinking is not a threat, but an enrichment and advancement. That is why, in addition to his music, Felix Mendelssohn Bartholdy is that valuable for today’s society and can be regarded as a mediator between the nations.