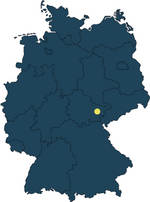 On the occasion of the 400th anniversary of Heinrich Schütz the Research Institute and Memorial Place Heinrich Schütz House in Bad Köstritz – the place he was born – opened to the public in 1985. In its exhibition the museum presents life and work of the first German composer of international importance as well as his cultural historical environment

For a long time Köstritz has been cultivating the heritage of Schütz. In the twenties of the last century the first Schütz society was founded there. When Schütz’ 350th anniversary was celebrated in 1935 the first monument was built. It was followed by another one in 1985. With the opening ceremony of the museum the tradition of the Köstritzer Schütz Tage (Köstritzer Schütz Days) has started and today still continues as Heinrich Schütz Musikfest (Heinrich Schütz music festival) which takes place in the first half of October every year.

The annual programme of the house includes concerts and family music, classes, seminars and colloquia, the weekend of Baroque music and the “Musikalischen Museumsrunden”. Furthermore, the house offers exhibitions at the “Schütz House Gallery” and musical practical events concerning the performance of early music as well as making music with children and adults in circles like “Köstritzer Flötenkinder” (Köstritzer Children Flute-players) or “Köstritzer Spielleute” (Köstritzer Bandsmen).

For students of all ages and all kinds of schools the Schütz House provides a comprehensive educational museum service.

In 1991 the friends and supporters of the house merged into the Schütz Academy which is also located in the Heinrich Schütz House.

Because his music brought light, faith and hope to the dark ages of the Thirty Years’ War Heinrich Schütz, who was still alive at the time, was called “Lumen Germaniae”- the light of Germany. He was born 8th October 1585 in Köstritz. He spent his childhood in Weißenfels where he was discovered by the landgrave Moritz. As a choir-boy at the landgrave’s court in Kassel he attended the Collegium Mauretianum before studying the law in Marburg. With the financial support of the landgrave he eventually went to Venice to study composition and organ with Giovanni Gabrieli. Back in Germany he first worked as an organist at the court in Kassel. Later he served as “kurfürstlicher sächsischer Hofkapellmeister” (director of music) for the Elector of Saxony Johann Georg I. Schütz travelled a lot. He not only went back to Venice and twice to Copenhagen, he also worked in Breslau, Hamburg, Wolfenbüttel and Torgau. His retirement home was in Weißenfels before he died in Dresden in 1672. Schütz brought the Italian musical tradition to Germany and is regarded as master who translated text into music.