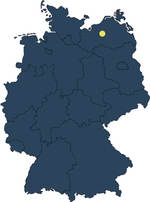 As a sculptor, draughtsman and writer Ernst Barlach (1870-1938) is one of the most important artists of the 20th century. He was born in Wedel near Hamburg and spent his childhood and youth in Ratzeburg and Schönberg/Mecklenburg. He attended a General Trade School in Hamburg and the Royal Academy of Arts in Dresden where he was educated as a draughtsman and sculptor. Later he travelled to Paris, the south of Russia and Florence which influenced his artistic work. In 1910 he settled in Güstrow. Barlach’s works show the human being facing conflicts of inside and outside reality. They are famous and unparalleled for their expressionistic strength.

The Ernst Barlach Stiftung was founded in 1994 succeeding the Ernst Barlach memorial of the former GDR. With its museums Getrudenkapelle, the studio house and the exhibition centre with the graphic arts cabinet the foundation belongs to the twenty Cultural Memorial Sites of national importance which are included in Geramny’s so called Blue Book – a list of culturally important institutions in Eastern Germany. Many of the manifold graphical works of Barlach and his original autographs are kept in the storages and archives in Güstrow. In permanent and changing exhibitions, scientific publications, readings and lectures, the foundation presents works of Barlach not only in Güstrow but also nationwide and abroad to an interested audience.