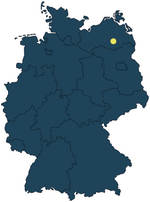 Founded in 1980, the museum is a memorial and research site for the internationally renowned archaeologist Heinrich Schliemann. The museum collects and preserves archaeological finds, documents in writing and picture, memorabilia, and books regarding the life and works of Heinrich Schliemann and his heritage in Mecklenburg. The collection is presented in a permanent exhibition on the ground floor of the originally preserved parsonage. Temporary exhibitions are regularly shown on the attic floor. Besides a small memorial site in Schliemann’s birth town Neubukow, the museum in Ankershagen is the only existing Schliemann museum in the world and it is also a centre for international Schliemann research. Apart from Schliemann’s original letters, the museum’s archive comprises 35 000 letter copies and copies of all 18 of his excavation diaries.

Compared to all other sites in Mecklenburg and elsewhere, Ankershagen has perpetuated the memory of this famous man from Mecklenburg in its most lively way. Here, the “genius loci” can be experienced at first hand. Almost all sights (e.g. tumulus, old castle) that Schliemann himself refers to in his autobiography can still be visited today and are accessible by a walking trail (“Heinrich-Schliemann-Wanderweg”).

Heinrich Schliemann (1822 – 1890) is rated as one of the best known archaeologists worldwide. He is co-founder of the “Spatenwissenschaft” (“shovel science”) and discovered pre-classicist, partly pre-Greek cultures in Turkey and Greece (Troy, Mycenae, Tiryns, Orchomenos). From 1846 to 1864 he worked as a businessman in Russia before he began building up his reputation as an excavator. From 1869 on until his death in 1890 he lived with his second wife, a native Greek, 30 years his junior, in Athens.